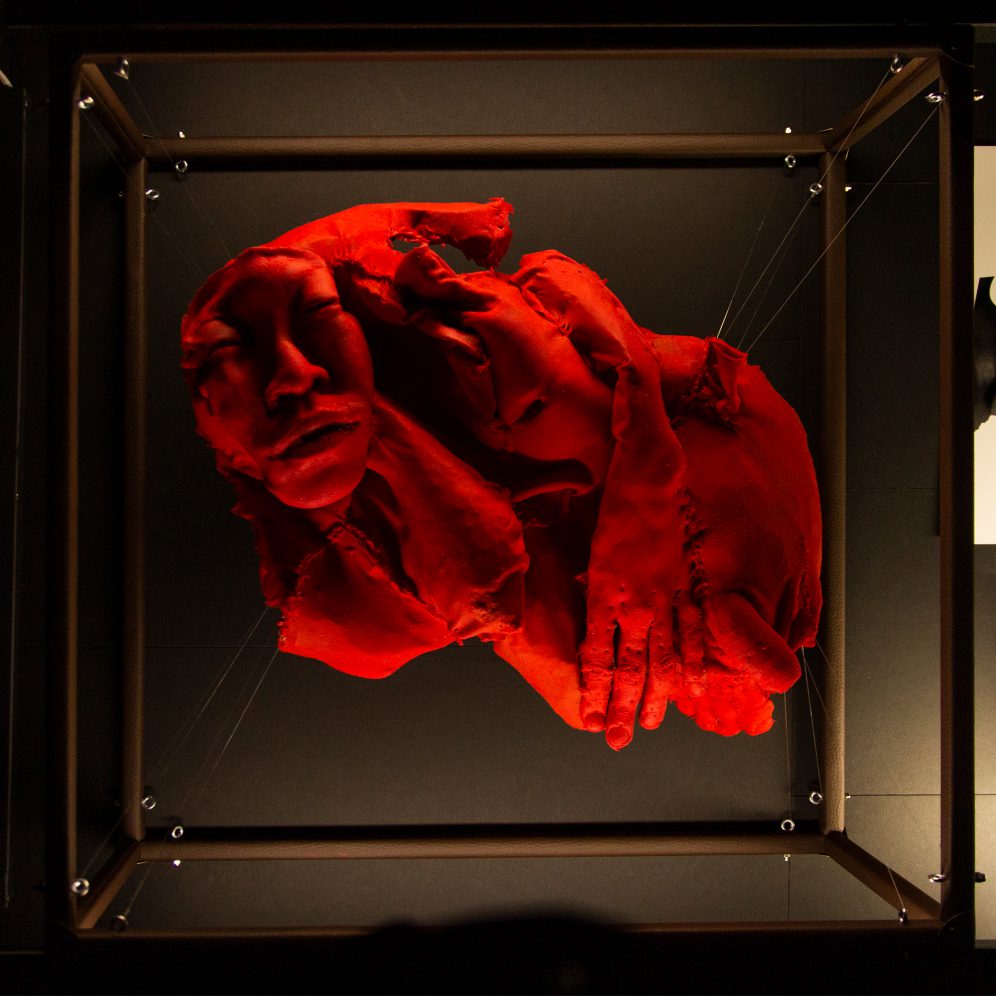 FOLD is the compression of artificial skin, suspended inside a cubic aluminum frame. 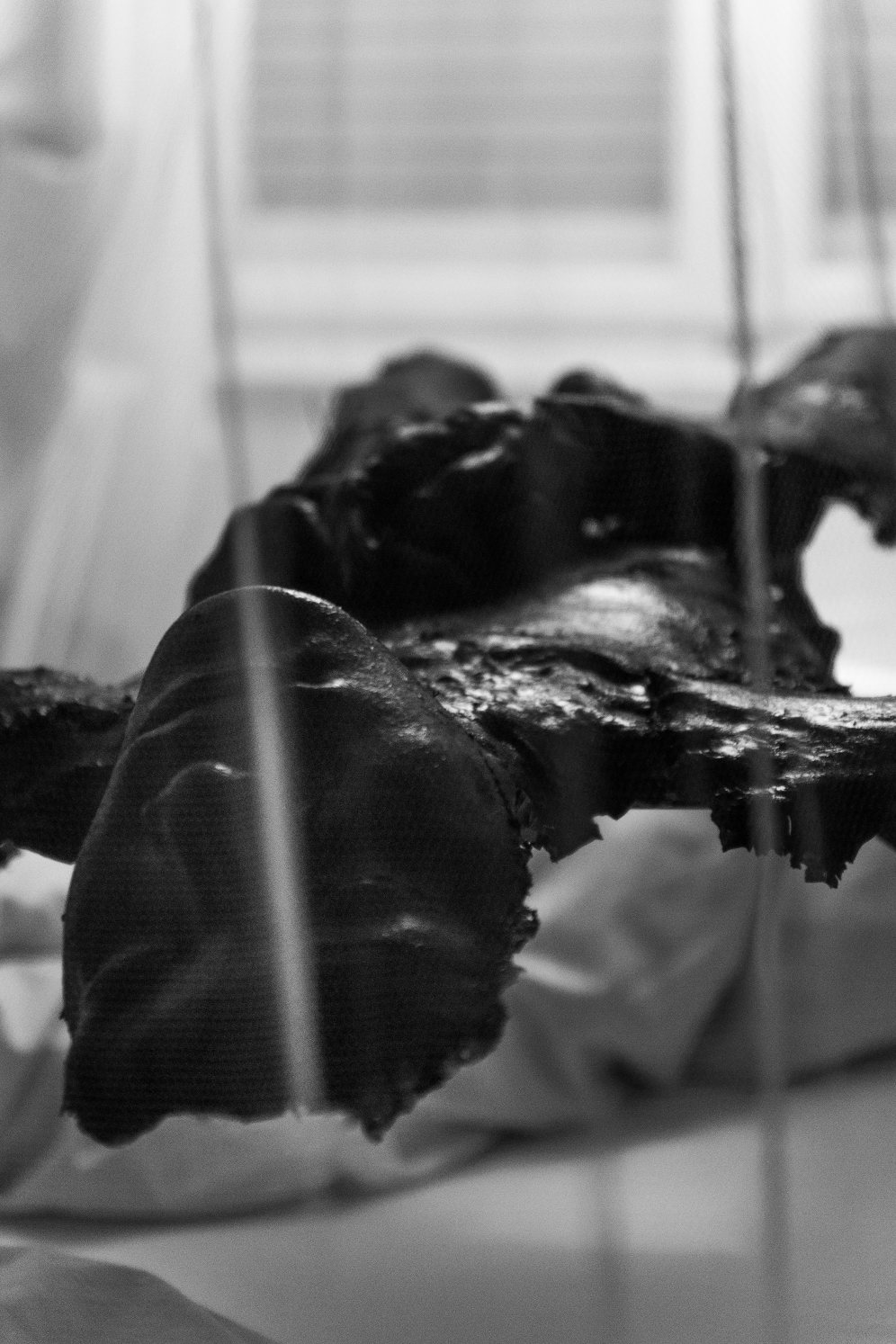 LIGHT SLEEPER (What if my bed is just a shelf for my body?) is an attempt of dealing with insomnia in threshold between dream and daydream and the limits of describing the compulsive world of thought of an insomniac by means of installation, sculpture, object and sound.

It presents the room as a stage, solely occupied by a free-floating sculptural structure hovering over the bed, accompanied by an ambient sound installation, in which the nocturnal noises of a bedroom – the circulation of the heater, the occasional night traffic on the street, random electrical discharge – are hyperreal, in the way only an insomniac can perceive sound in red-eyed phases of unrest. Headphones reveal an ongoing, unbroken stream of consciousness, nearly intelligible words, an almost formulated inner monologue, thought loops that keep the sleeper from sleeping.

Subversively, the installation plays with the irony inherent in the exhibition space: a hotel, an anonymous transfer zone, exclusively built for resting; albeit resting, sleeping is impossible in the traffic of the exhibition, in the unfamiliarity of a hotel bed. 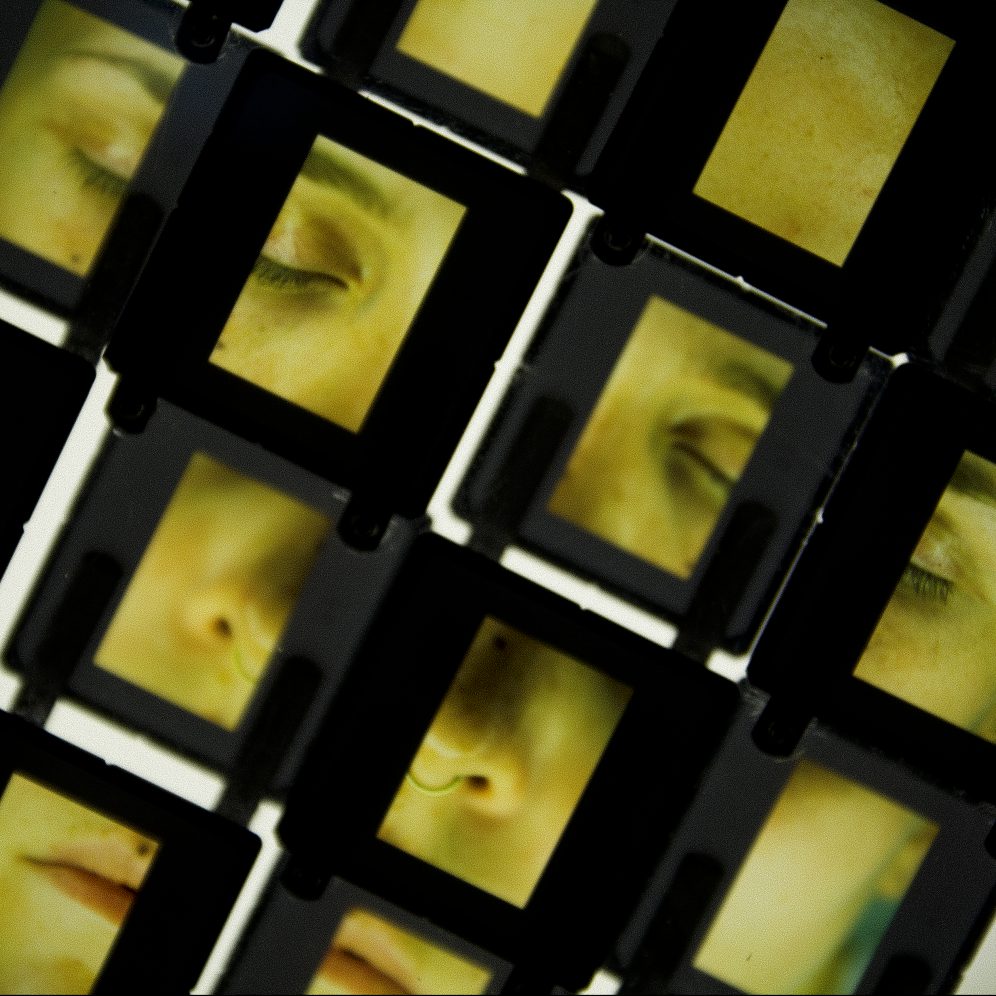 EVA PERSONA is a series of artworks that challenges the concept of the portrait. The artworks investigate the limitations of depicting a human face, hence asking questions about the properties and conditions of being a person.

The face is presented through flatbed-image planes as well as time-based video representations in two-, three- and four-dimensional projections. 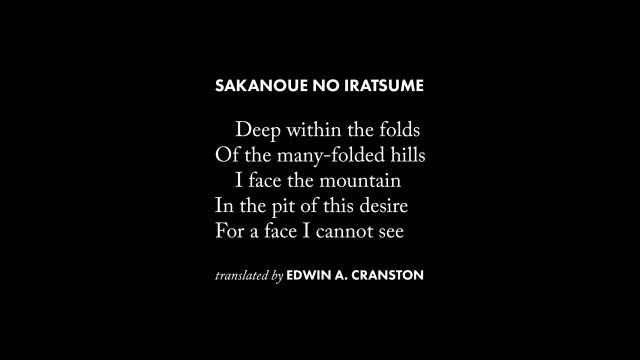 EVA PERSONA from An Laphan on Vimeo.

EVA PERSONA (Exhibition View) from An Laphan on Vimeo. 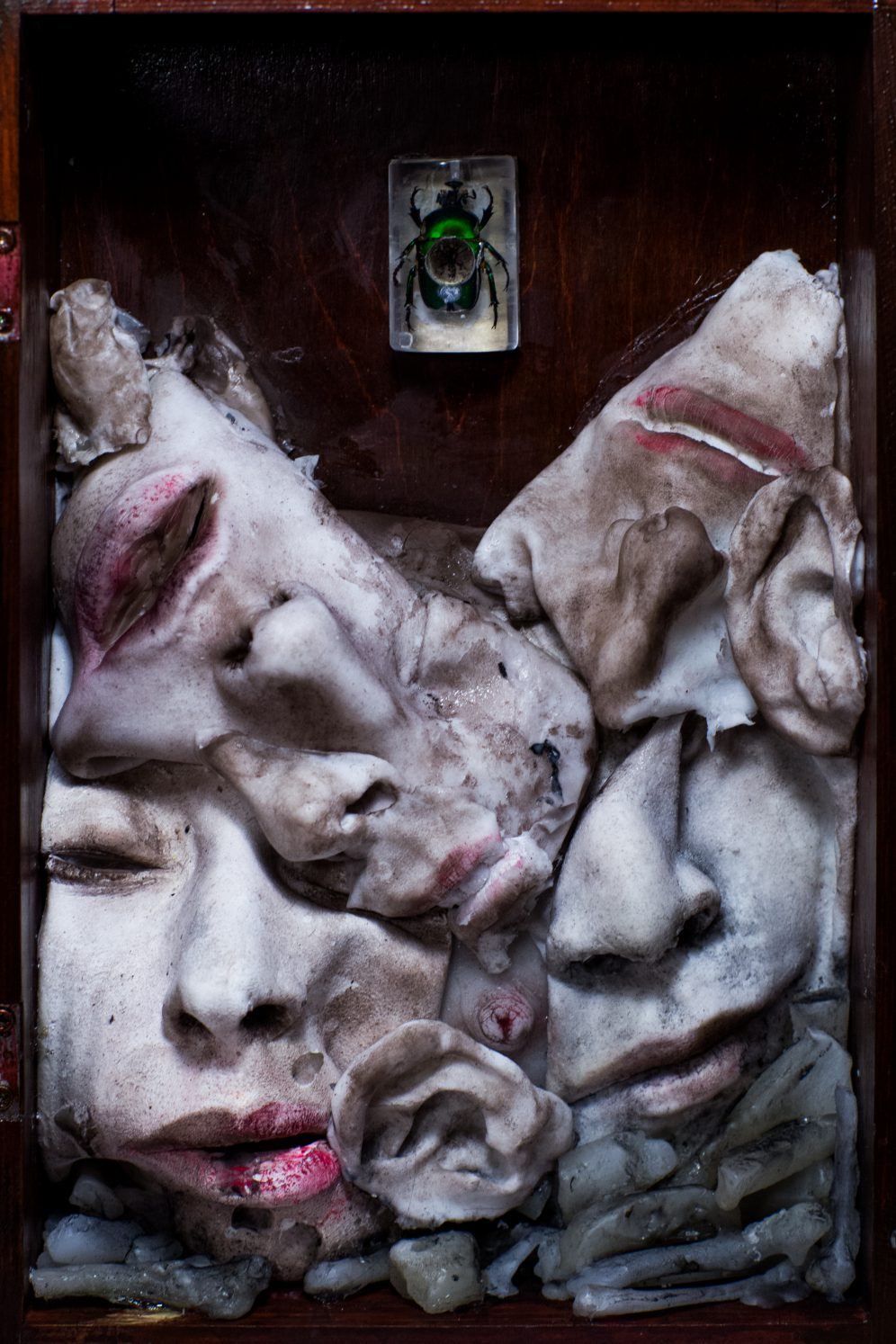 About life and death by reference to the honey bee and the scoliid wasp in two artefacts.

FROM THE BEE TO THE WASP simulates the object fetish of altars and reliquary shrines. The boxes show an ironic depiction of vanitas, in which the life-giving effects of bees are juxtaposed the parasitic and deathbringing qualities of the wasp.

Inside the bee box (left): bee larvae, honey, blossoms, fruit kernel, a belly button and a fruit.
Inside the wasp box (right): a rose chafer in epoxy resin (pierced), the idea of the wasp as parasite, the shells of her hosts, one orange peel.

In honor of the hermeticist poetry. 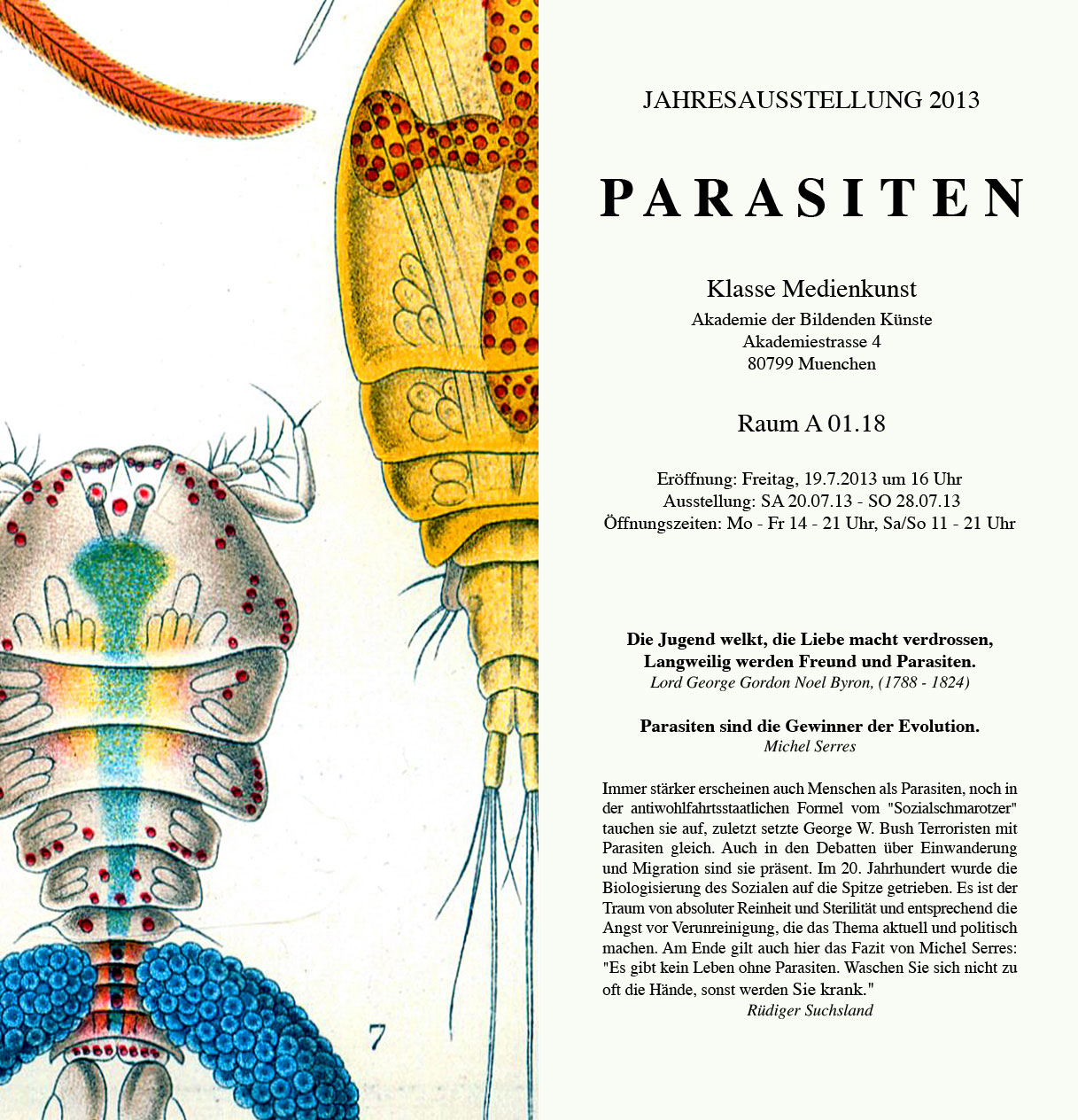